This is an excerpt from Ontario Majority, our brand new newsletter covering Ontario politics.

If you like what you see and want to keep getting this newsletter, you can subscribe to start receiving them every week.

Another week, another record set for daily COVID-19 cases in the province. Well actually three records.

The government has finally taken some action to restrict venues where the virus has been known to spread. But some think it’s too little, too late. Overshadowed by this news is the weeklong outpouring of alarming details coming out about the Ford government’s response to COVID. Here are the top revelations:

1. Experts advised the Ford government to boost testing capacity months ago; but the government didn’t want to spend the money

It turns out that over the past five months, experts had been pushing the Ford government to expand COVID-19 testing capacity. They were told in the summer, by their own experts, that Ontario should aim to expand testing until 75,000 to 100,000 tests could be processed every day.

Had the province done that, the system would not have been overwhelmed by a surge in cases this Fall. Instead, the province’s testing capacity remained stagnant for the entire summer. A source familiar with the situation told the Toronto Star that Ford didn’t act “because the price tag was so big.”

It wasn’t until late September that the government announced a $1 billion plan to expand testing. By then the second wave was already here. Now, it will take roughly three months for Ontario to catch up to where it should be.

Trying to save a few bucks in the summer, has now cost the government much more. And it has cost many Ontarians their health and even their lives.

2. Ontarians’ test swabs are being sent to a questionable American company

The Ford government’s failure to prepare our testing system for the second wave has resulted in a fiasco that we’ve watched unfold the past several weeks, including hour-long line ups, people turned away, and a massive backlog of tests.

The Ontario government has resorted to sending COVID-19 tests thousands of kilometres away – to an American company for processing. Quest Diagnostics, the company in question, has a worrying track record with processing COVID-19 tests for other jurisdictions.

In September, the company was fired by the Florida government after results for 75,000 tests went missing.

When the company’s track record is not good enough for Florida, what makes Doug Ford comfortable sending Ontarian’s swab tests to this corporation?

3. Hospitals were essentially told to “hide the curve”

A leaked memo has revealed that some Ontario hospitals were told to reduce testing volumes at assessment centres. Other hospitals have retained their targets, but testing numbers are dropping there as well.

Experts say it’s due to the new appointment-only model introduced by the government. But the switch has merely brought the line-ups online and hidden the true backlog, according to doctors.

It was just a few days ago that Doug Ford told Ontarians that he was “flattening the curve.” It’s become clear that, well, this is not at all the case.

4. The situation in Toronto does not look good and Ford’s hesitation to act was not helpful

For months now, Doug Ford has repeated this line – “We won’t hesitate to again shut it down.”

For weeks, however, Ford rejected calls from Toronto’s Chief Public Health Officer for Ontario to enact tighter restrictions, including shutting down indoor dining and other venues.

Ford refused, saying experts need to “show [him] the proof.”  So Toronto’s Dr. De Villa did just that. She showed that, over the past three weeks, 44% of COVID-19 outbreaks were linked to bars, restaurants and entertainment venues.

The city’s top doctor has even released new modelling that should be ringing alarm bells. The models show that if there are no interventions to reduce the reproductive rate, COVID-19 cases will continue to rise until well into next year.

New data is also showing that certain Toronto neighbourhoods are seeing test positivity rates above 10%. “Anything over 3 per cent is pretty high,” says Dr. Andrew Morris. “When you get over 8, 9 or 10 per cent, it’s very, very high.” 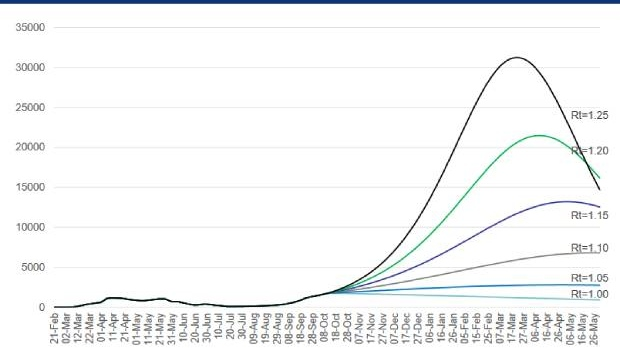 It took all this – and two back-to-back records for daily COVID-19 cases – until Ford decided to act. Certain regions are now moving back to “Stage 2,” with indoor dining, gyms and casinos set to close down.

Understandably, there were worries that people and small businesses would not be able to make it through another lockdown. But this should not be an either/or scenario. “Either we prioritize public health or prioritize people’s livelihoods.” That’s a false choice and an easy answer for a politician.

The government needs a plan to financially support Ontarians should there be a second lockdown. Realistically, they should already have one. The fact that they were so hesitant to lock down again means they likely don’t.

From the very start, bad communication has been a major problem with Ford’s COVID response. Remember when he told everyone to go away for March Break?

Well this week, the confusion was on full display – on live television.

Premier Ford not only contradicted his public health experts advice on Thanksgiving gatherings, he contradicted himself. No wonder Ontarians are confused. (By the way, what ever happened to social bubbles?)

Ontario’s COVID-19 response has a broader communication problem as well. Their words and recommendations don’t match their own rules. You can’t blame folks for not following your advice, when your own rules say something different.

On the one hand, the virus was not serious enough to shut anything down (so they said). On the other hand, they blame individuals for not taking the virus seriously enough.

Businesses, where people can gather in crowds, were left open. And that was ok. But people gathering in crowds wasn’t.

When you contrasted the government’s words with their actions, nothing makes sense. Until today, someone could have gone to a club with 99 strangers in it, but gathering with 10 of your family members for thanksgiving is forbidden.

See where I’m going with this?

This week has been overwhelming. Ontarians are expected to take in so much information that changes every day. It’s chaotic and it’s not helping anyone. Finding answers in this chaotic media environment is difficult, if not impossible. I hope this week’s newsletter helped clarify a few things.

Tell us what you think!

Take the poll: Do you think Doug Ford acted too late in restricting indoor bars, casinos, and other venues?

A weekly newsletter on the issues that matter to the majority of Ontarians.

Ontario Majority covers the latest in Ontario politics under the Ford government and unpacks the harm being doing by the Premier through under-covered stories and analysis.